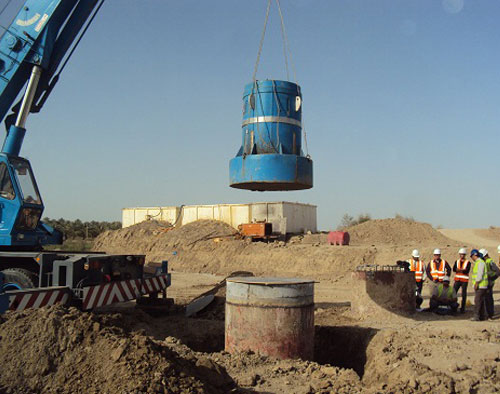 The procedure is standardized by ASTM D4945-00 Standard Test Method for High Strain Dynamic Testing of Piles. It may be performed on all piles, regardless of their installation method. In addition to bearing capacity, Dynamic Load Testing gives information on resistance distribution (shaft resistance and end bearing) and evaluates the shape and integrity of the foundation element. 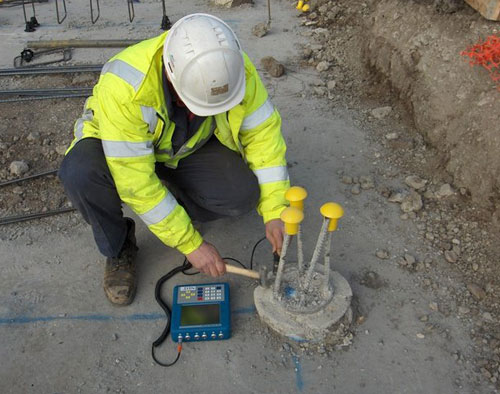 A pile is a slender element cast in the ground or driven into it. Since pile construction as well as the final product are mostly invisible, engineers have often questioned their integrity, i.e. their compliance with project drawings and specifications. In fact, experience [1] has shown that in piles of all kinds flaws may occur. The purpose of integrity testing is to discover such flaws before they can cause any damage.

A pile integrity test (also known as low strain dynamic test, sonic echo test, and low strain integrity test) is one of the methods for assessing the condition of piles or shafts. It is cost effective and not very time consuming.

Pile integrity testing using low strain tests such as the TDR (Transient Dynamic Response) method, is a rapid way of assessing the continuity and integrity of concrete piled foundations.

The test measures: Pile length, or depth to anomalies Pile head stiffness Pile shaft mobility – which is dependent on pile section and concrete properties The software also produces computer simulations and impedance profiles of the test result, to analyse in detail any intermediate pile shaft responses.

The test is based on wave propagation theory. The name "low strain dynamic test" stems from the fact that when a light impact is applied to a pile it produces a low strain. The impact produces a compression wave that travels down the pile at a constant wave speed (similarly to what happens in high strain dynamic testing). Changes in cross sectional area - such as a reduction in diameter - or material - such as a void in concrete - produce wave reflections.

This procedure is performed with a hand held hammer to generate an impact, an accelerometer or geophone placed on top of the pile to be tested to measure the response to the hammer impact, and a data acquisition and interpretation electronic instrument.

The test works well in concrete or timber foundations that are not excessively slender. Usually the method is applied to recently constructed piles that are not yet connected to a structure. However, this method is also used to test the integrity and to determine the length of piles embedded in structures. Widely used in Australia now on existing structures.

Parallel Seismic (PS) is a borehole test method developed for the determination of unknown depth of foundation elements. This method can also detect major anomalies within a foundation as well as provide the surrounding soil velocity profile. Procedure In the Parallel Seismic (PS) test method, the exposed top of the foundation is impacted by an impulsive hammer to generate compressional or shear waves which the foundation and are refracted to the surrounding soil. The refracted wave arrival is tracked at regular intervals by a hydrophone three-component geophone receiver in a cased borehole. The depth of the foundation is determined by plotting the first arrival times as a function of depth and observing the depth where a change of slope occurs. Alternatively, the foundation depth can be determined by observing the depth where the signal amplitude of the first arrival energy is appreciably reduced. 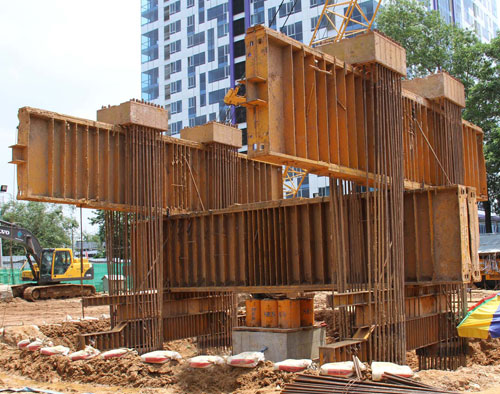 Test loading is the most definitive method of determining load capacity of a pile. Testing a pile to failure provides valuable information to the design engineer and is recommended for load tests performed prior to the foundation design. Such testing permits the selection of both the optimum helical screw foundation and the design load. 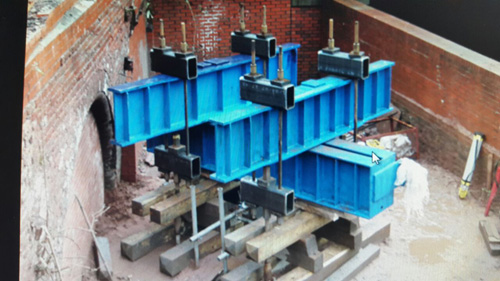 The fundamental principle behind pull out testing is that the test equipment designed to a specific geometry will produce results (pull-out forces) that closely correlate to the compressive strength of concrete. This correlation is achieved by measuring the force required to pull a steel disc or ring, embedded in fresh concrete, against a circular counter pressure placed on the concrete surface concentric with the disc/ring.The pullout test produces a well defined in the concrete and measure a static strength property of concrete. The equipment is simple to assemble and operate.

As the insert is pulled out, a roughly cone shaped fragment of the concrete is extracted. The compressive strength which is considered as an indicator of quality is obtained from the calibration curves, prepared based on laboratory and field tests conducted on concrete cubes and pull out samples cast with various grades of concrete. In the test assembly, the embedment depth and insert head diameter have to be equal with inner diameter of the reaction ring could vary between 2 to 2.4 times the diameter of the insert head. The apex of the conic frustum defined by the insert-head diameter and the inside diameter of the reaction ring can vary between 54 degree and 70 degree. The compressive strength can be considered as proportional to the ultimate pullout force. The reliability of the test is reported as good.

Lateral load tests were conducted at the field test facility from early June through October, 1998. Thirty-one tests were performed on three groups of piles with embedded caps, two single piles, and a buried concrete bulkhead.

In all the tests, compressive loads were applied through the vertical centroidal axis of the foundations. Tests were performed using incremental, cyclic, and sustained loading procedures, as described below. The incremental procedure is historically the most recognized approach for performing lateral load tests on piles and drilled shafts. The procedure used in this study consisted of applying loads of increasing magnitude in 10 to 20 kip increments.